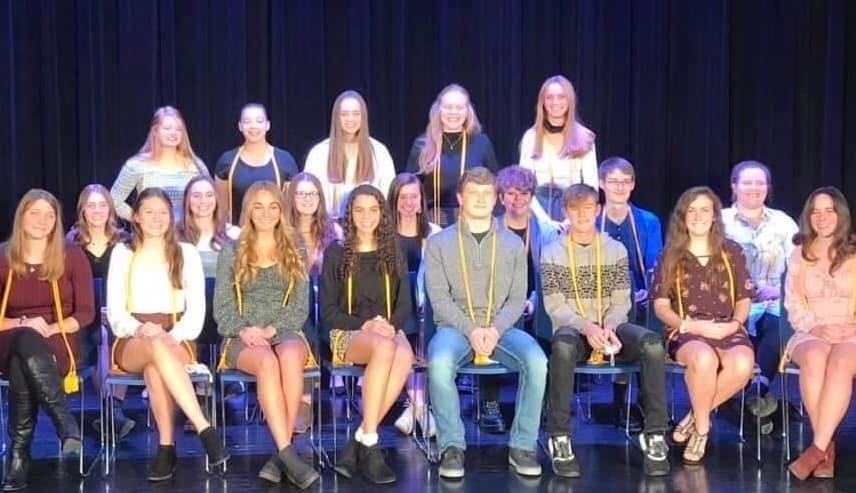 ZThe West Liberty – Salem Chapter of the National Honor Society inducted twenty three new members on Monday, December 14th, at 7 pm in the High School Cafetorium.  This group included one senior and twenty two juniors.  Hayden Phillips presided as Master of Ceremony under the theme of “Let’s Glow Together.”  Co- President Joshua Spinner spoke on “Glow where ever you go for you are not alone.” In spite of some changes to this year’s ceremony traditions were made possible including the reading of the four core values of the NHS. Historian Kienna Whitman led with Leadership, Vice – President Noah Cline on Scholarship, Secretary Trinity Perkins on Service and Parliamentarian Garrett Richardson on Character. Member Selena Weaver called each inductee forward as member Maria Henderson handed each their certificate and member Andrew Stoner placed the chords on the inductee. Lastly, Co-President Joshua Spinner lead the group in the NHS pledge. Final words were given by Administrator Mr. Greg Johnson after which the group was released for the group photograph. Despite a different ceremony than usual, administration and NHS leaders worked hard to provide a safe and socially distanced plan so an in person ceremony was possible.  NHS would like thank art teacher June Seymour for making a gold mask for the juniors and a blue masks for the seniors for the ceremony.