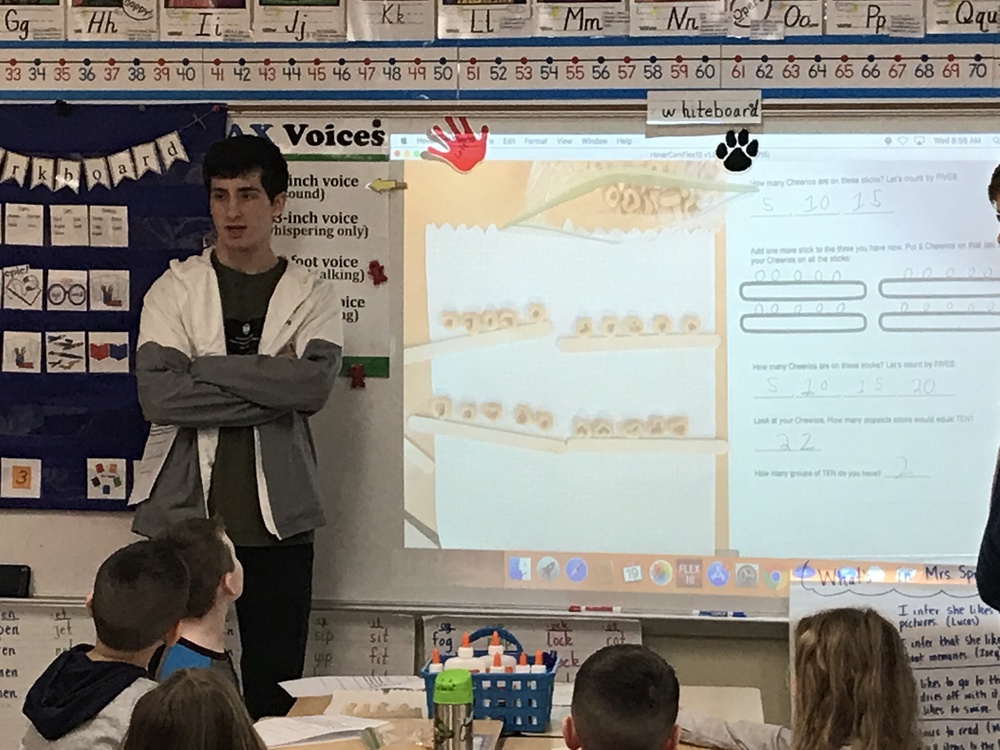 Mrs. Brandie Roberts and her college physics class shared a fun STEM activity with first graders in Mrs. Spring and Patton’s class this morning.  First graders are currently working on counting by ones, fives, and tens, so using this activity helps reiterate concepts they are practicing each day.  First graders tally the days of school by ones, weeks of school by fives and groups of tens using fun rhyming songs about pennies, nickels and dimes to correlate the concepts.  This morning’s activity combines both Math and Science.  Trenton Douthwaite and Jaden Marchal explained the activity, students passed out supplies and assisted with grouping cheerios.  First, they used cheerios to group them in groups of five.  Next, they counted out ten cheerios and added up the total number of cheerios they had in all, and what a bright group of first graders we have!  They all knew the answer!  They used their popsicle sticks to count more cheerios in groups of fives and tens. Finally, they removed all the counting groups, and started on the science portion of the project.  Dawson Jenkins explained two different types of energy, kinetic  and potential.  He used a rubber band to explain kinetic or moving energy, and the still rubber band as potential energy.  Cooper Havens demonstrated energy with a ball and  Savannah Weaver reiterated this concept by having students sit and stand to explain which energy they are using. Lance Baldwin demonstrated a fun game they created by using their popsicle sticks to create a shape.  They did not use glue to hold the shape together but rather laced the sticks together.  Next, they lined up and tossed their shapes (potential energy) against the wall where they fell into a box.  The shapes dispersed back into individual sticks and the concept of kinetic energy was clear!  The sticks, once just a fun shape, had potential to separate and fall back to individual sticks creating kinetic energy!