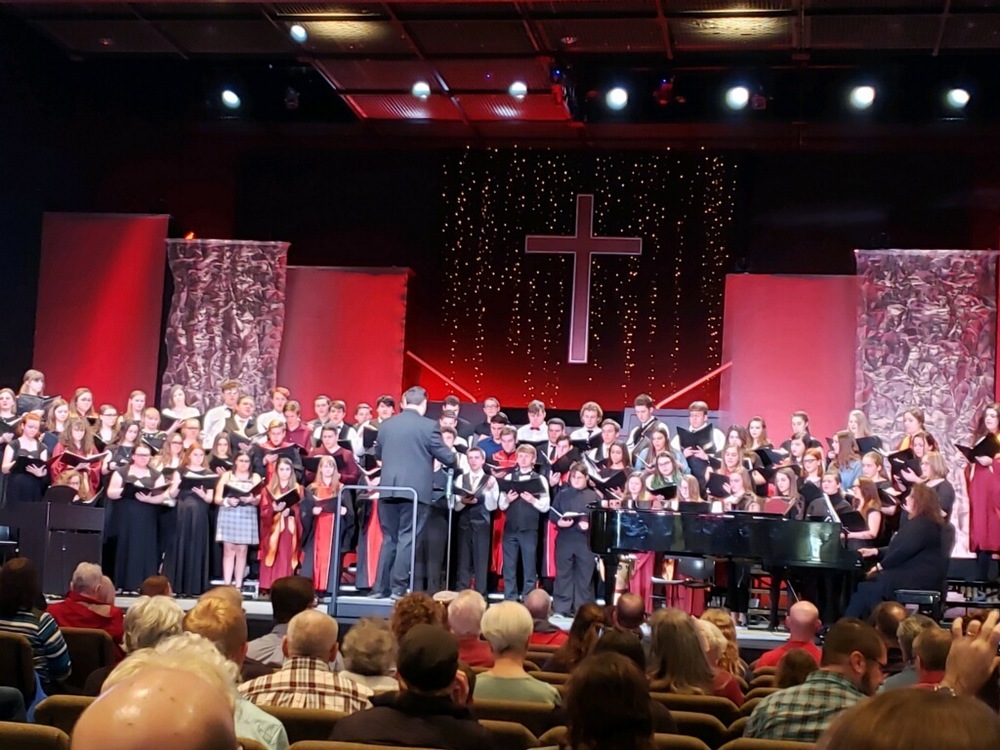 West Liberty-Salem Band, Choir and Art teacher’s sent 22 students to study at the OHC Fine Arts Festival at First Christian Church in Springfield, Ohio on Tuesday, February 11th.  The event is organized each year by Cedarville High School, as well as OHC Art, Band and Choir teachers, Superintendents, Principals and parents.  Mr. Brice Henry, Mr. Stephen Fannin, Mrs. June Seymour, Mr. Chris Smucker, Superintendent Kraig Hissong, and parent volunteers joined our students for the event.  In total, 265 area students were selected by their art and music teachers based on their excellence and good attitude in art, band or choir and is representative of their great and consistent efforts.  Organizers of the event said, “It should be viewed indeed as a noteworthy honor to collaborate with the best our conference has to offer.”   Students arrived shortly after 8 a.m. reporting to their respective areas of study where they worked with guest conductors, artists and students from Cedarville, Fairbanks, Greenview, Madison Plains, Mechanicsburg, Northeastern, Southeastern, Triad and West Jefferson.  They ate lunch and quickly went back to work where they prepared for an evening art showcase featuring works from each student.  Choir and band students closed out the day with a concert featuring four pieces each selected and directed by Dr. Christopher Hoch, Director of The Ohio State Universtiy Marching Band and Athletic Bands and Dr. Jon Peterson, Director of Malone Universtiy Chorale Activities.  It was an honor to have our students directed by great conductors, and we are thankful for the opportunity to be invited each year.  The following WL-S students were selected: