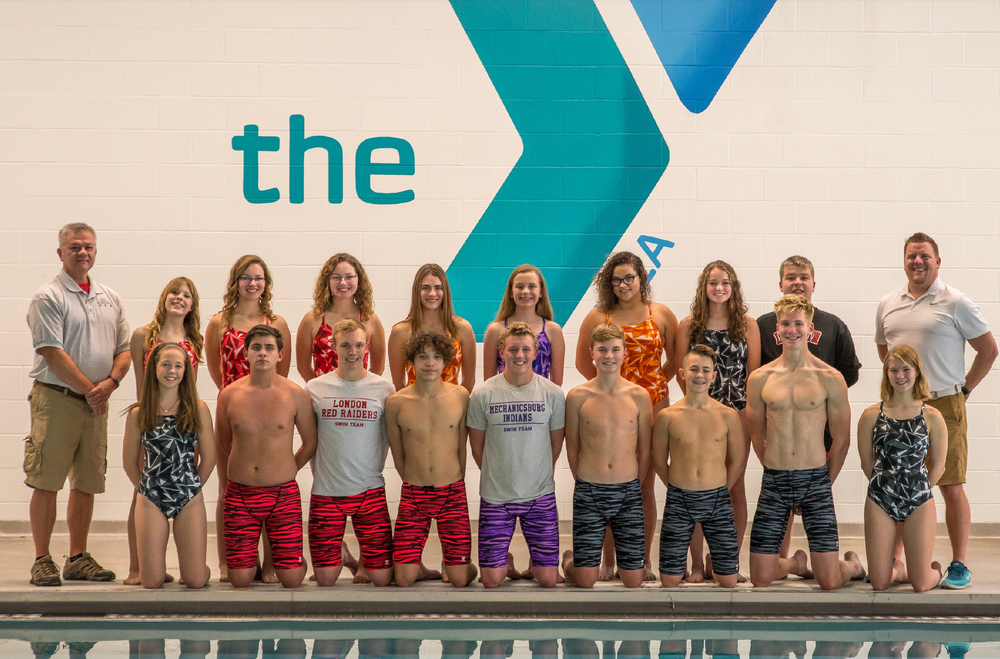 Many don’t see each other everyday in hallways or in math class like other athletes in their high schools and their letterman jackets have different school colors, but make no mistake, these student athletes are teammates. They all belong to the growing Champaign Area Swim Team nicknamed Team Champ.

After a humble beginning of four swimmers from Mechanicsburg and London High Schools in 2016, Team Champ has grown steadily during the last three seasons and now includes seventeen high school student athletes from London, Graham, Mechanicsburg, and West Liberty.  London Senior Emily Bennett and Ethan Kramer, a Junior from Mechanicsburg, have been on the team since the beginning. Each has watched the team grow over the years and see the makeup of the team as its biggest strength. Emily notes, “Despite us going to different schools, I feel that when we see each other at practices and meets, we haven’t skipped a beat. Being a part of a team that represents not one, but four swim teams has been a lot of fun as we always cheer and support each other. It’s fun celebrating our time drops together.” Ethan emphasized the strength in numbers, "I'm one of two swimmers from Burg. Last year, I was the only one. I love swimming, but it's a lot more fun with teammates."

West Liberty Salem Junior Katelyn Stapleton and Graham Fresham Jack Boggs are new to the team this year. As a YMCA lifeguard, Katelyn watched the team practice last season and thought it looked like fun. "Making friends from other schools has definitely been a plus." Jack added, "I love how I can meet new people and build relationships with people from other schools. I can’t wait for next year."

Team Champ is unique on several levels. First, although the swimmers compete for their own respective high schools, Team Champ swimmers practice together, warmup together, sit together at meets, and root each other on during races. Swimmers wear caps representing their high schools, but wear suits that are the same pattern as their teammates just in different school colors. Even the coaching situation is unique with the London Superintendent, a parent of one of the Mechanicsburg swimmers, leading the program.

Team Champ works thanks to the sponsorship of the Champaign Family YMCA, partnering school districts, and dedicated swimmers, coaches, and families. Each participating school recognizes swimming as a sport and hires volunteer coaches. Student athletes and their families foot the bill for entry fees and provide their own transportation. The YMCA provides pool time to practice and collects and pays entry fees for swimmers. Coaches develop a common meet schedule and handle all practice and meet coaching and logistics.The team’s uniqueness is beginning to gain some notoriety at meets with frequent positive comments from other coaches, swimmers, and fans. The team’s suit color and style scheme creates a unique visual when the team is assembled, one which prompted a competing swimmer to compared the team’s look to that of a bunch of Skittles candies. This is probably a good comparison, like Skittles, Team Champ athletes are unique and different but seemly to go together pretty well.