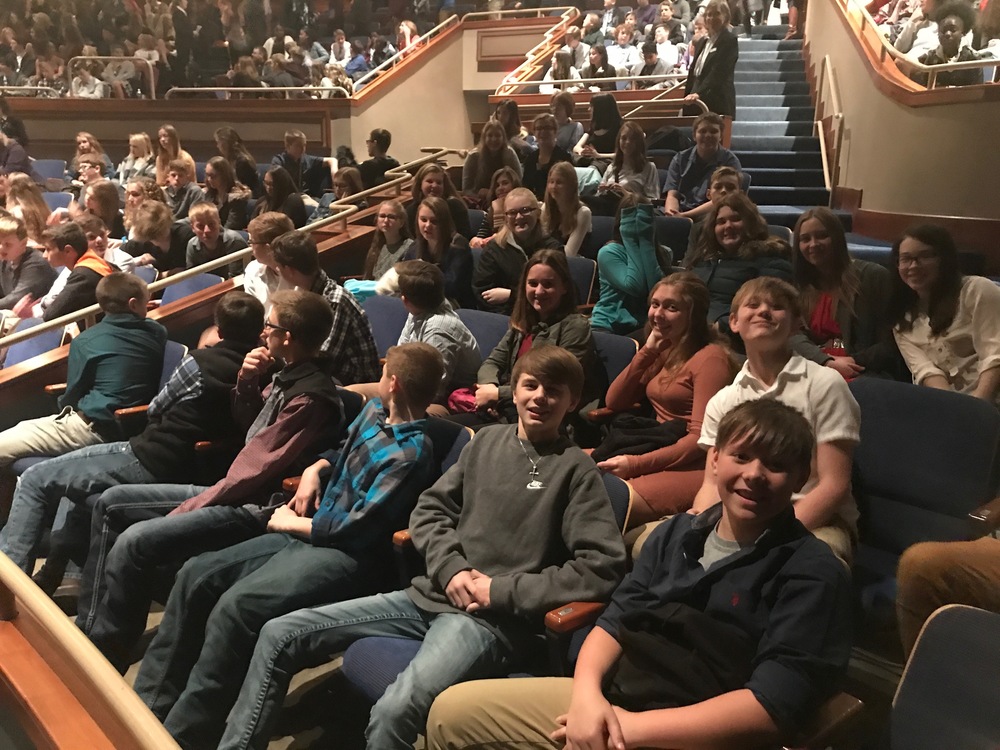 On Thursday, November 7th, the eighth grade from West Liberty-Salem took a trip to the Davidson theatre in Columbus, Ohio. They went to watch a group named Chamber Theatre Productions preform a drama called Encore!  The weather was not the best due to snow, strong winds, and mist. The buildings were modern and new. When they entered the lobby, the first thing the students noticed was how tall the ceilings were and how elegant the design was. In the actual theatre, it was cold, but the seats were comfortable. There were six different plays preformed such as, “The Tale-Tale Heart” and “The Monkey’s Paw.” Back at school, the students read all six stories and were asked to compare them.

There were many differences found by viewers in the written and live versions of “The Monkey’s paw” by W. W. Jacobs. For example, the written version described a moment where a character named Herbert looked at the fire to see a simian face appear in it, which never happened in the play. A second example found is that in the beginning of the written version, it was a man who gave the family the monkey’s paw who was just returning from India. In the live version, it was a woman who gave them the paw, after describing how her husband had just died, in war, in India. Lastly, in the story, as the woman raced to see her son back from the dead, her husband just stood there and let her open the door. In the play, the man ran and got to the door before her to save her from being horrified. In conclusion, “The Monkey’s Paw” has many differences between different versions.

The next story, “The Tell-Tale Heart,” has many things you could contrast between the types of it. For instance, in the story, the murderer killed the man by covering him with his own bed. In the play, the man used a string to suffocate and kill the person. A second difference is that in the play, the murderer used a spoon and scooped the old man’s eye out, which did not happen in the written version. The third difference the students noticed was how towards the end, there was one officer questioning the man in the play. The story included two officers. To sum up, the story “The Tell-Tale Heart,” by Edgar Allen Poe, consists of many differences between two kinds.

The theatre and production had many interesting details that the students enjoyed. The theatre was very elegant, with the gold and silver elements added to the sophisticated design. In the actual room where the production was performed, the effects including the lights and sounds, were obviously up to date. It was very easy to hear and see everything that was going on, according to the students. The drama group had a very interesting style of performance. They would do a  slight introduction before most of the plays. Almost every actor that performed was in at least two plays. From what was heard, some of the students found the plays to be boring while others found them to be entertaining. Altogether, the students found the theatre and plays to be a decent class field trip.

The eighth grade field trip to the Davidson theatre was a fun time for them. The chilly weather did not effect their ability to have a good time. There were many new sights for some people, being in the most populated city in Ohio. The production was very entertaining to some students. Overall, the day as a whole was a great day full of learning experiences in literature.